A day in the Life - Community Services Manager

When you speak to Munya you notice how calm he is and it’s a quality that has been the mainstay throughout his career.  Munya studied a HND in Computing but diversified into retail.  Having had a successful business running his own fashion shop, he recognised that he needed to change direction as internet shopping was impacting his business.  Munya moved into a very different sector as a Detention Custody Officer at the Colnbrook Immigration Centre, where his natural ability with people and gently authoritative manner complimented the need to keep order, whilst ensuring the welfare of detainees.  He was rapidly promoted to Acting Custody Manager overseeing the vulnerable person's unit.  It was in this position that Munya identified a growing need to gain skills to support people with mental health challenges.

Around 2009 Munya was thrilled to become a Dad, but the day to day challenges and shift pattern of the Immigration Centre kept him away from home.  He wanted to do a job where he would be able to have some time with his daughter whilst still achieving job satisfaction.  The housing sector offered a more structured environment, so he undertook a Degree in Housing.    Munya left the Immigration centre to work for Surrey based housing association, Transform, as a Supported Housing Officer.  He gained a huge amount of on the job experience working at a 16-25-unit mental health unit which, along with his Degree, gave him an excellent foundation for a career in the housing world.

In December 2014 Munya moved across to Housing Solutions as a Floating Support Manager, helping our vulnerable customers to gain independence and grow in confidence.  The role also meant that they are given necessary support which may include help with managing their finances, employment assistance as well as helping them to become more socialised.  In 2016 Munya became a Supported Housing Team Leader and was then promoted to Community Services Manager.  Munya manages a happy, close knit team of 6 including 2 Floating Officers, 2 Supported Housing Officers and 2 Lifeline and Repair Assistants.  Between the team they cover 52 supported properties including care homes.   Each day is very varied, and you have to be prepared for everything and anything.  A large part of the role is making sure that you a visible support for the team to help the navigate through any demanding issues of the day and support them.  Munya is also Safeguarding Lead and maintains relationships with the local Borough of Windsor and Maidenhead especially focusing on supporting any vulnerable people who could be victims of abuse, neglect or exploitation.

There have been several cases where Munya’s support has had rewarding outcomes and its enormously satisfying to receive a thank you from a customer who has changed their life, positively.  As Community Services Officer helping people to grow their confidence so that they can enjoy a more stable life brings Munya the job satisfaction that he was hoping for. 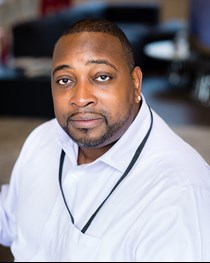